Answer: There are many playback settings that can be selected. The options are as follows: 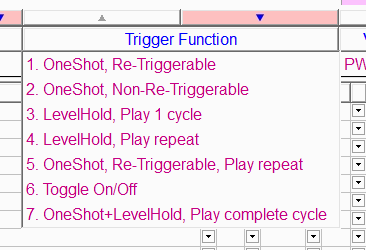 Question: If the white button is pressed and not released will message repeat?

Answer:   Yes & No. Usually, the message will only play once. Button has to be released and pressed again for the message to replay - unless you have selected Trigger function  #4 above "Level Hold Play Repeat." In this case, the message will loop until you release the button, then start from the beginning when you press the button again.


Question: When playing back my sound files they sound distorted. 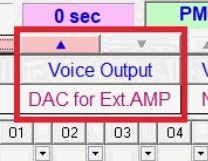 Answer: Be sure to select "DAC for Ext.AMP" under the Voice Output tab in the PM66Q software before you program the board. Failing to do so, will make the sound distorted during playback on the module.


Question: What happens if the white button is pressed again during the playback of the message?

Answer: This depends on the mode that is selected, see Q1. Some modes stop the message - some start it over


Question: During playback of a segment, what will happen if the white button of another segment is pressed?


Question: Can each of the buttons only record 75 seconds?

Answer: No. Each segment can be more than 75 seconds or less than 75 seconds. However, the total length of all 5 segments together cannot exceed 5 minutes at 4.7K. Higher resolutions are available but the recording time will be shorter than 300 seconds.


Question: Do all the recordings get erased when the batteries are removed?

Answer: No; it is a non-volatile memory. Removal of the batteries will not erase the recordings.


Question: How can I make this unit sound louder?


Question: How can I make this unit louder?

Answer: Unfortunately, the unit can only record 300 seconds at 4.7k. It can record approximately 50 seconds at 16k.


Question: Should I use the 8bit mono unsigned or 16-bit mono signed?

Answer: Either one is fine. They will both work and it shouldn't make much difference.


Question: Can I get more than 4 switches on this unit?

Answer: We can custom build units with up to 8 switches and with longer recording times - up to 1200 seconds. However, your minimum order quantity would need to be at least 500 pieces. BUT you can also program the unit to cycle through the groups in each key. Also, see the FN-BC10-SP


Question: What are the "Groups" in the software and how do I use them?

Answer: The groups are very powerful and make this product very much more useful. If you want to use the same button to trigger different messages (up to 100 per button), use the groups’ function. How? When you are programming a key with .wav files, click on "2" in the "Group" column on the left of the software window. Now on line 1 under the "No." column, program your next .wav file. (NOTE: You can stack up to 200 .wav files in each group. These files will play consecutively when the group is triggered, back-to-back nonstop.) Go on to group 3 and continue programming as many messages as you like (within the 300 seconds). Now when you press that key, it will play group one. The next time you press the same Key, it will play group 2, and so on.


Question: What are project files and how to load them.

Answer: Project files allow you to load preselected settings and preselected sound files. This is convenient when needing to record the same files with the same playback option at a later date in time. Project files are in the format of .P66 and to load them you simply need to click on the "Load File" button, then navigate to where you saved your project file. To save a project file you need to import all desired .wav or .mp3 files, select your settings and then click the "Save File" button.

Answer: To import .wav or .mp3 files into the software select the first drop-down menu on each of the rows numbered 1 through 200. In the drop-down menu select "New mp3 or wav." You will then be prompted to select your desired .wav or .mp3 file. You can find pictures on how to do this in the Setup Instructions which you can download above.

Answer:  After you have added your sound files in the PM66Q program make sure to save your settings first by clicking on the "Save file" button, and THEN click the "PM66" button to program your module. (this is different from the previous version hardware where you could program the module directly without saving the configuration file first. (see step 9 & 10 here)

Question: The USB5M comes with a 3.5mm mono output jack. Will a 3.5mm stereo cable work with it?
Answer: Yes a 3.5mm stereo cable will work, but a mono signal will still be sent through the cable meaning you will get the same audio output on both speakers if you are using two speakers. The signal will not get split into a right and a left channel.

Question:    I have trouble getting the module to work.
Answer:    See this trouble shooting guide: